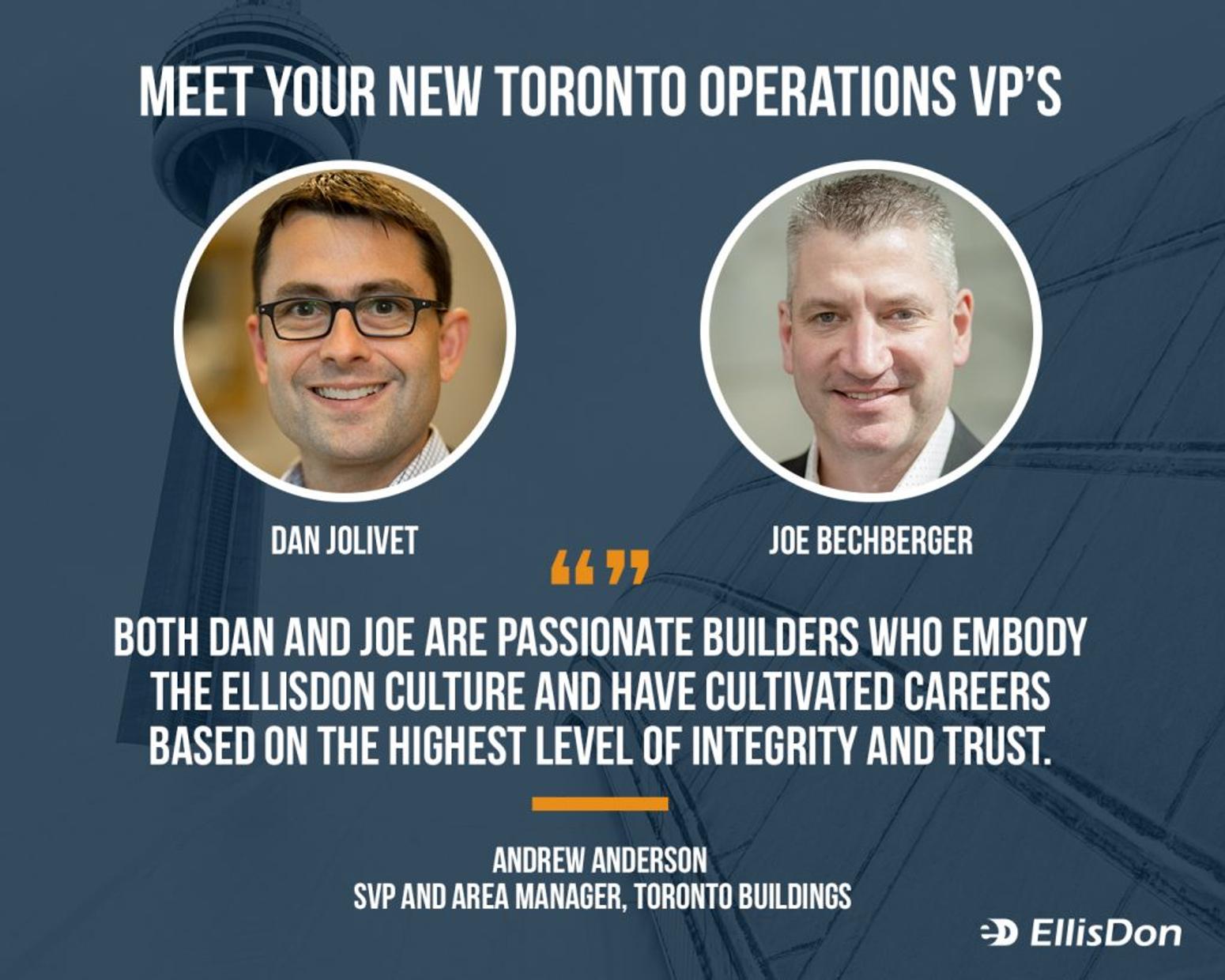 Mississauga, ON, October 3, 2019— EllisDon is pleased to appoint Dan Jolivet and Joe Bechberger as Vice Presidents of Operations, for the Toronto Buildings Group.After over 30 years with EllisDon, Tim Smith will be stepping down from his role as Interim Senior Vice-President of Operations, with Dan and Joe taking on their new roles effective immediately. Tim will continue to provide support and mentorship as a Senior Advisor.“In true leadership form, Tim was the first to recognize that the timing is right to step aside and allow the next generation of senior leaders to take the next step in their careers with EllisDon,” says Andrew Anderson, Senior VP and Area Manager, Toronto Buildings. “Our group is extremely appreciative of all his efforts these last few years.”Since joining EllisDon in 1998 as a Project Coordinator and quickly progressing to the role of Project Manager, Dan has had a successful 20 year career with the company. Dan has worked on some of EllisDon’s largest and most complicated healthcare and research facility projects including Toronto General Hospital Peter Munk Tower, Bloorview Kids Rehabilitation, Krembil Research Tower, and the SickKids Research Tower. In 2017 Dan progressed from Construction Manager to sector Vice-President, Mission Critical & Pharmaceutical. Having completed over $800 million in data centre projects, Dan quickly became widely recognized as an industry leader in this unique sector.“Dan and Joe are passionate builders who embody the EllisDon culture and have cultivated careers based on the highest level of integrity and trust,” says Andrew. “Their continued efforts, enthusiasm and support of Dan and Joe in their new roles will ensure our ability to remain as industry leaders, and to ensure our success for years to come.”Joe brings over 20 years of vast construction industry experience. In 2001, Joe joined EllisDon as a Project Manager where he was instrumental in the delivery of many projects including Budweiser Gardens, EllisDon’s first P3 project. In 2007 Joe was offered a once-in-a-lifetime opportunity to take on the role of General Manager of Construction Operations for The Collavino Group which was contracted to build the tallest tower in North America – the Freedom Tower, in Lower Manhattan. Joe returned to EllisDon in 2013 joining the Calgary team in various capacities including Construction Manager, Civil Manager, and Director of Pre-construction. While working out west, Joe’s most notable project in the region was Brookfield Place in downtown Calgary. In 2017 Joe joined the Toronto Building’s team where he assisted in the pre-construction and start-up of many notable ICI and residential projects, and most recently held the position of Director of Operations, Institutional.This new strategic structuring will help ensure that all partnering operations leaders are set-up in a more collaborative, adaptive, and flexible manner while they continue to lead the successful delivery of EllisDon’s projects.