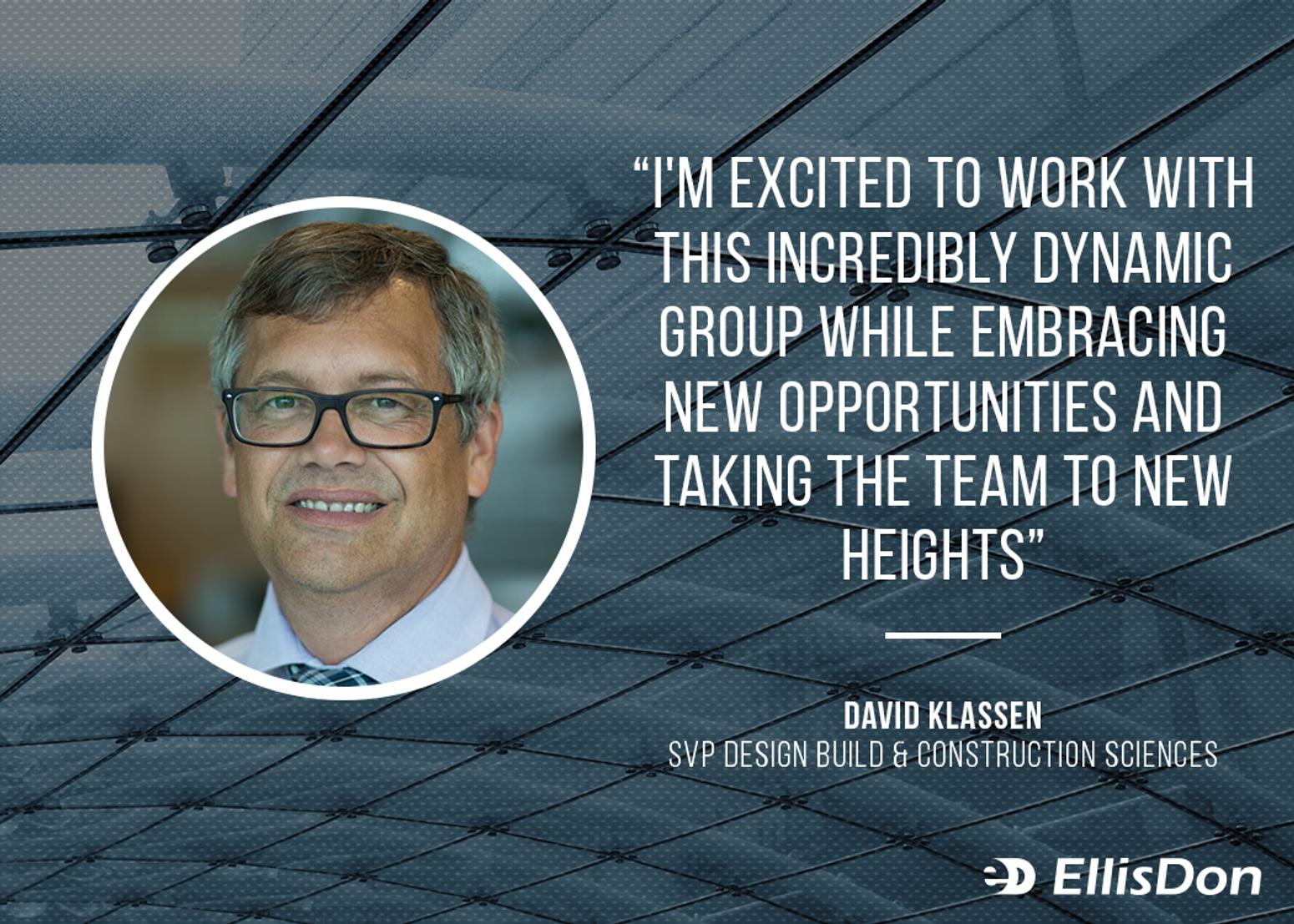 Mississauga, ON, June 11, 2019 — Last week, EllisDon announced the appointment of David Klassen to the role of Senior Vice-President of Construction Sciences in addition to his current role as Senior Vice-President of Design-Build."I'm excited to work with this incredibly dynamic group while embracing new opportunities and taking the team to new heights," said David Klassen, Senior Vice-President Design Build & Construction Sciences, EllisDon.EllisDon's Construction Sciences division is the technical bridge between conceptual design and final execution. This group works collaboratively across five pillars including Construction Engineering; Prefabrication and Modular; Construction Planning and Logistics; Building and Material Sciences; and, Quality Assurance. Construction Sciences ensure that construction innovations, methods, equipment, and materials are investigated and where appropriate, adopted by EllisDon.David joined EllisDon in 1989 as a co-op student and has been involved in the design management and development of RFP technical and financial submissions for DBF/M projects since 2002. In his early years with EllisDon David relocated to the US to assist with the company's entry into the US market having worked on the South Carolina Aquarium project and the Olympic Village project in Atlanta, Georgia.Upon his return to Toronto, David held the position of Project Manager in EllisDon's Design-Build division and has managed a variety of pursuits from healthcare, mixed-use neighbourhood development, courthouses and correctional facilities. David was actively involved with EllisDon's first P3 project at William Osler Hospital in 2004 and has since been a part of every AFP/P3 initiative that the company pursued. David has played an instrumental role leading the design team and steering the pursuit on some of EllisDon's most successful projects including Toronto South Detention Centre, New Oakville Hospital, Pan-AM Village, Waypoint Mental Health Facility and the Joseph Brant Redevelopment project."David has built an incredible world-class team and has mentored many of EllisDon's Project Managers that have led some of the most complex projects in the market today," said Kieran Hawe, COO & Executive Vice-President, Construction Operations, EllisDon. "We are looking forward to David leading the Construction Sciences group and working collaboratively with the respective leaders across the company."View the full press release HERE