Getting Deep: The Well 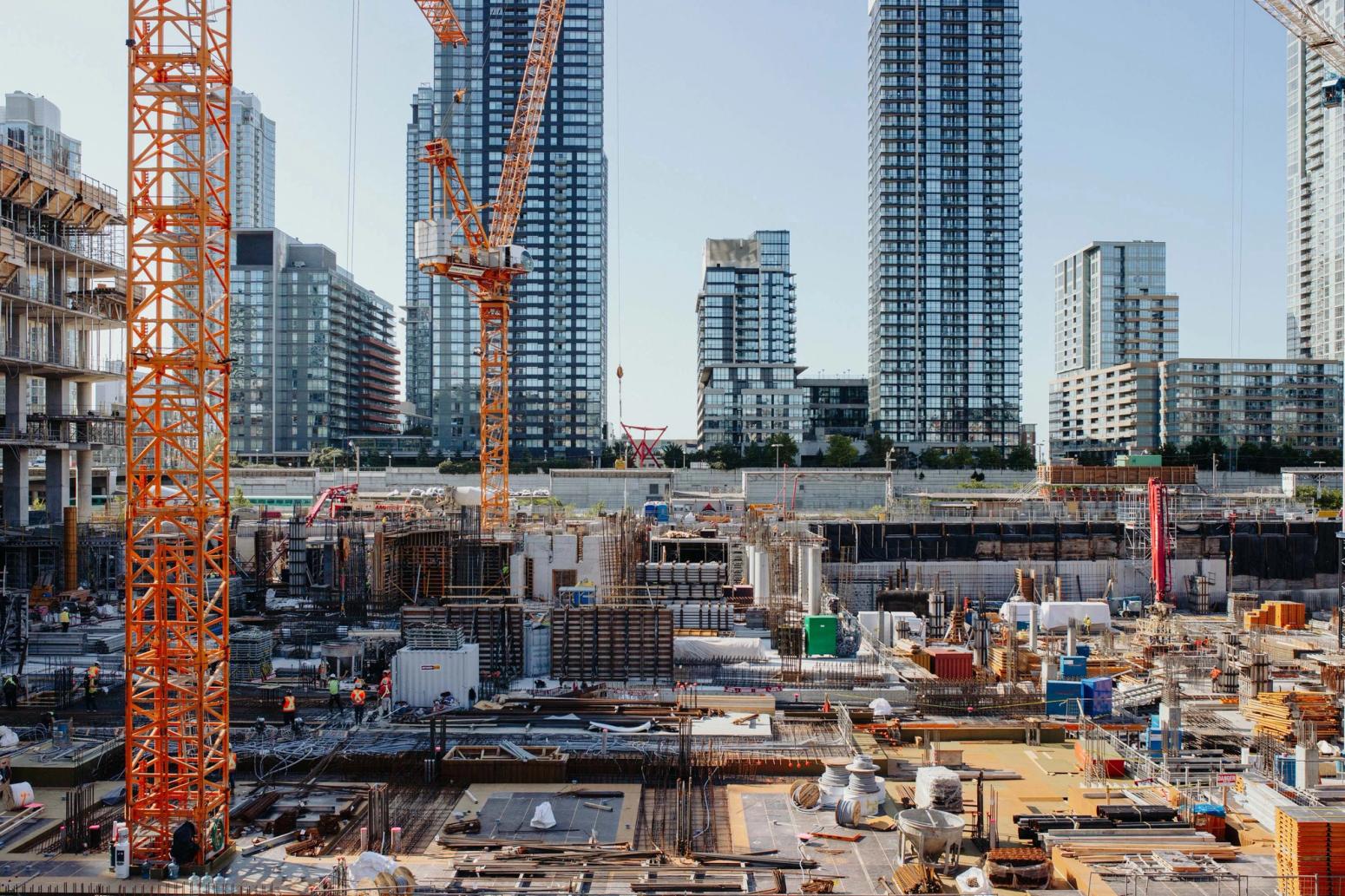 TORONTO’S LARGEST CONSTRUCTION SITEThe view of The Well project from Front Street and Spadina Avenue looks quite unassuming — just another high-rise going up during Toronto’s massive construction boom. But as you enter the project site through Wellington Street, you quickly realize that looks are, indeed, deceiving.“It’s definitely the largest and most high-profile project I’ve ever worked on,” says Jeff Murkar, EllisDon Senior Project Manager on The Well. 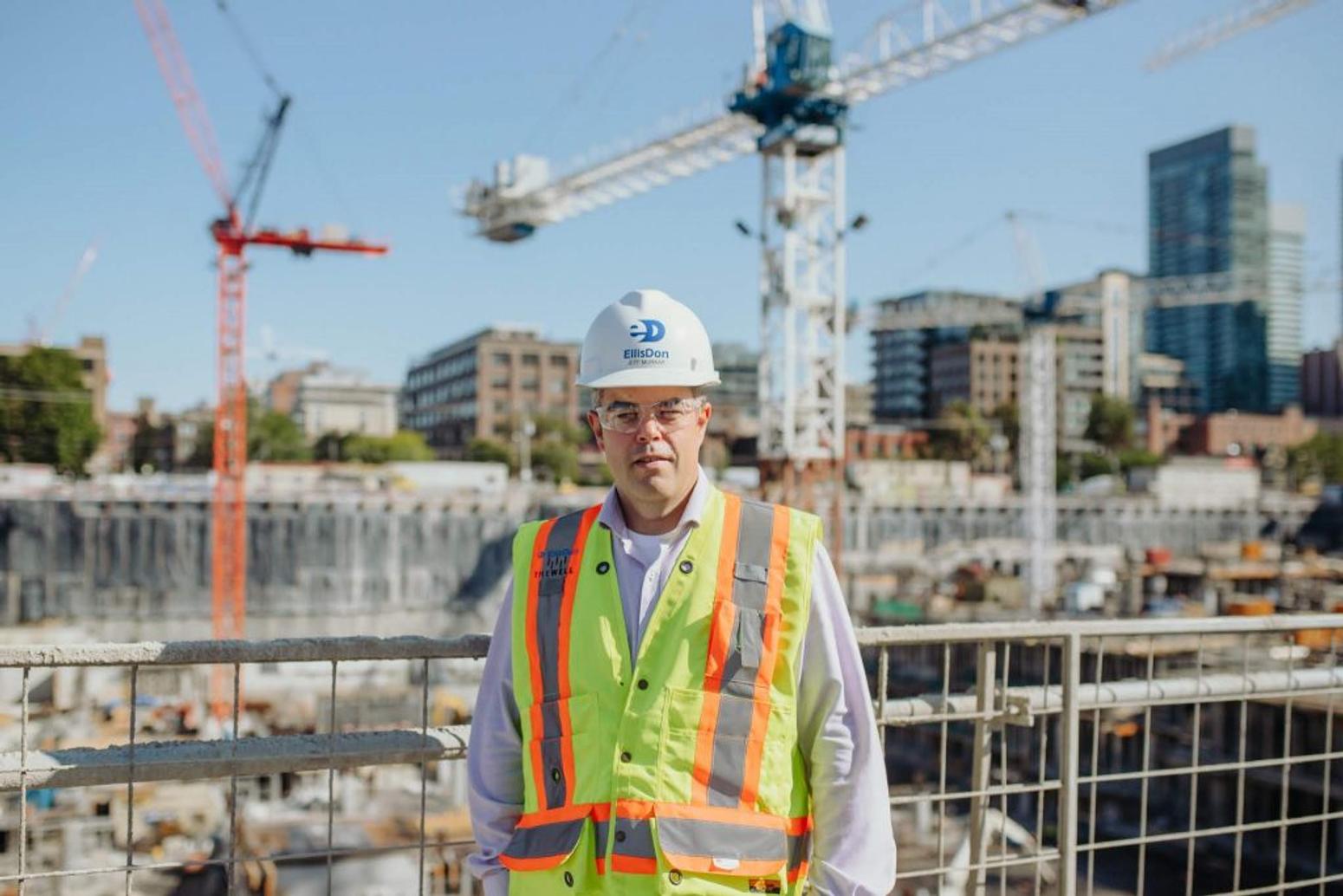 The behemoth of a site sits on 7.8 acres of land that used to be home to the Globe and Mail office and press building. This mixed-use development is transforming the neighbourhood and will feature a variety of retail, restaurants, three high-rise condominium buildings, three high-rise residential rental buildings, and one commercial office tower. 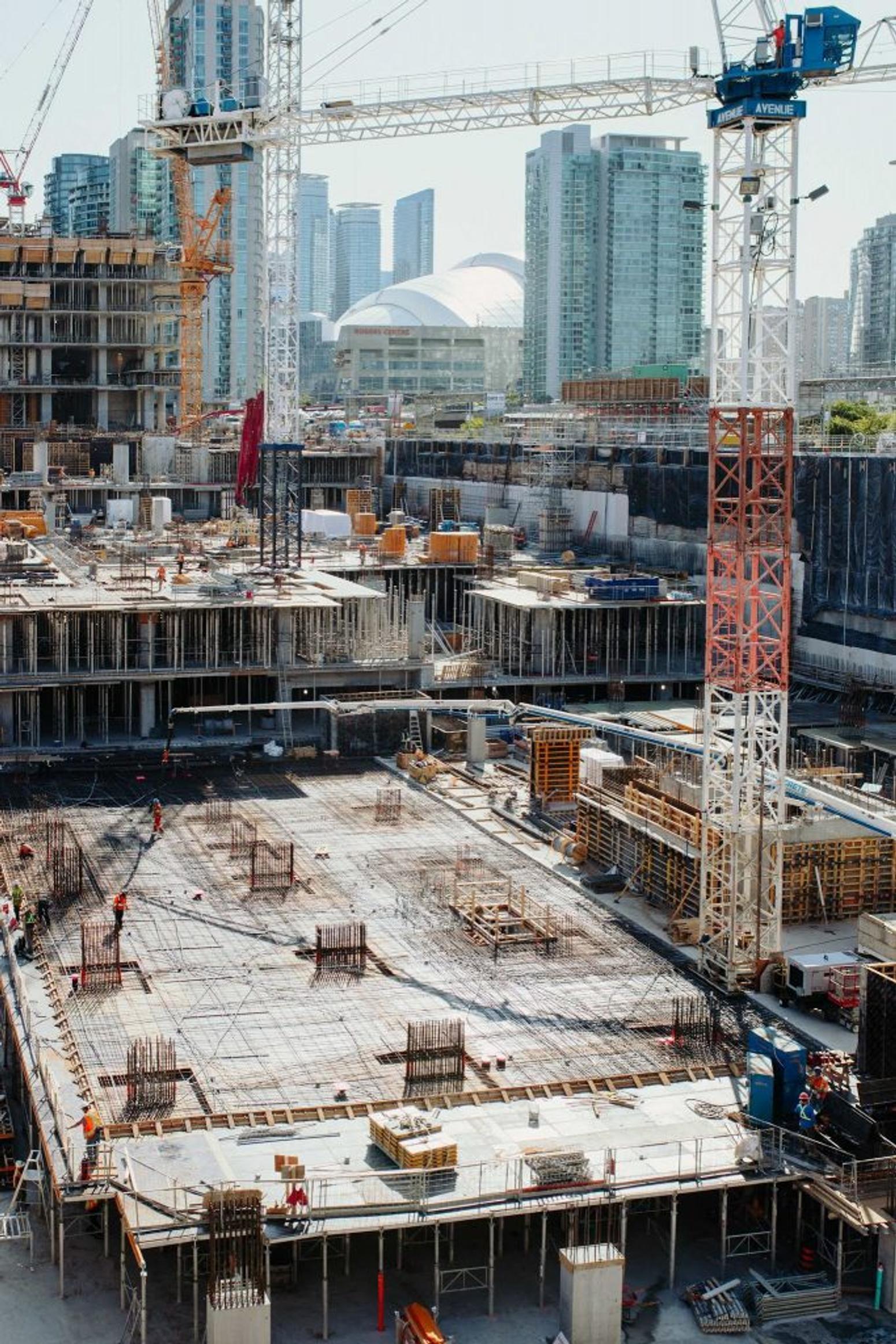 The project’s sheer size and the limited space on one of downtown Toronto’s busiest intersections has posed some challenges. With only one construction laneway on Front Street and heavy vehicular and pedestrian traffic during the day, the team must be diligent in planning and executing all deliveries and equipment lifts to provide minimal disruption to the neighbourhood.EllisDon is constructing the commercial office tower, Building G the largest of the towers in The Well development, which sits on a five storey podium and will rise 39 storeys. The tower consists primarily of commercial office space, the P2 level, ground and second floors will host retail space, and the 38th floor will be home to a restaurant featuring a spectacular 360-degree view from 164 metres above the ground and will be complemented with a roof-top patio. 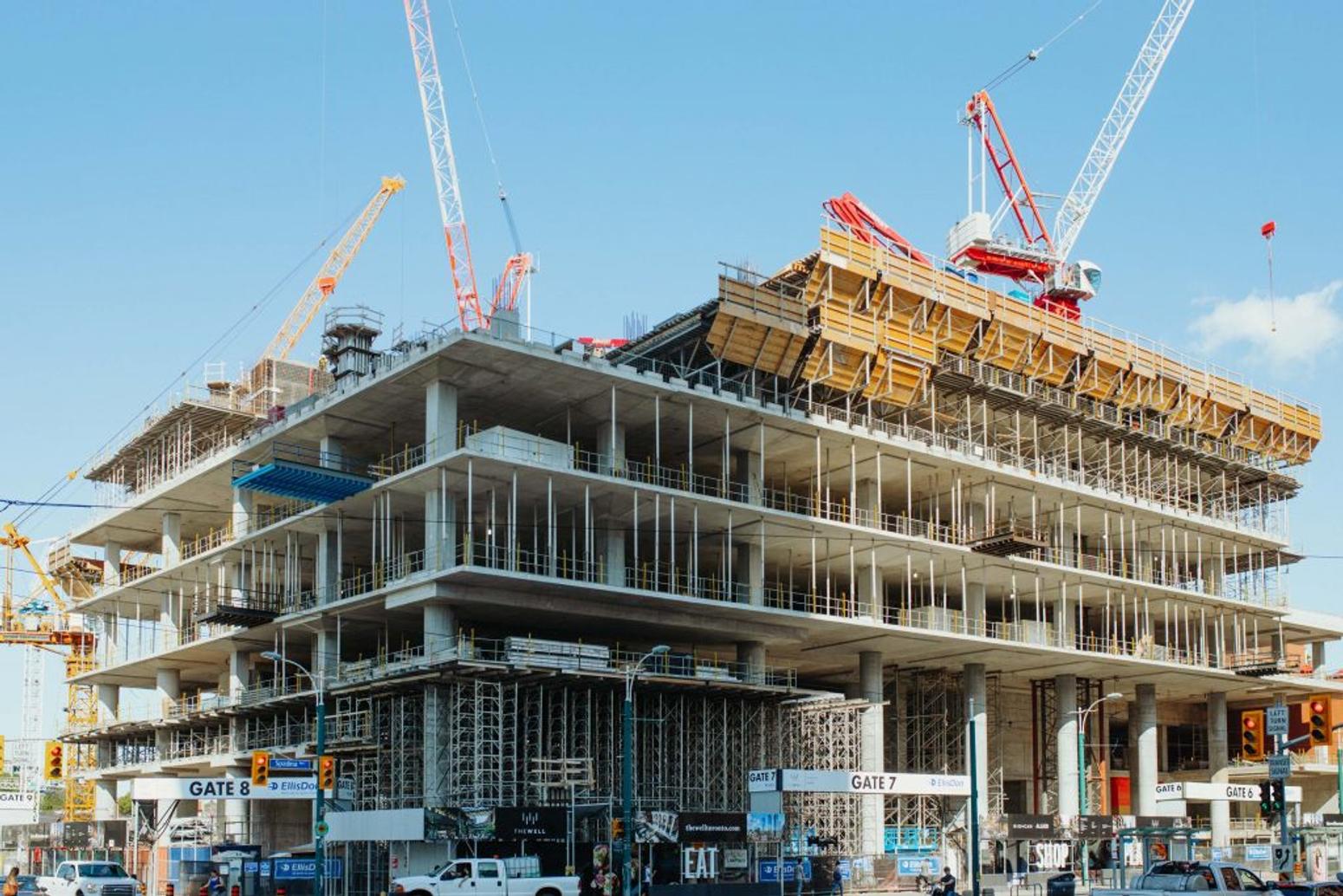 Building G consists of over one million square feet of below and above grade work. The curtain wall façade includes distinctive large aluminum cross bracing and fly-by corners on the North and South elevations. The buildings unique look also stems from its step backed design which allows for landscaped terraces at several levels of the building. The building features an offset core that contains 26 elevators, of which five will be glass backed that provide views of the city while travelling up to the 19th floor. 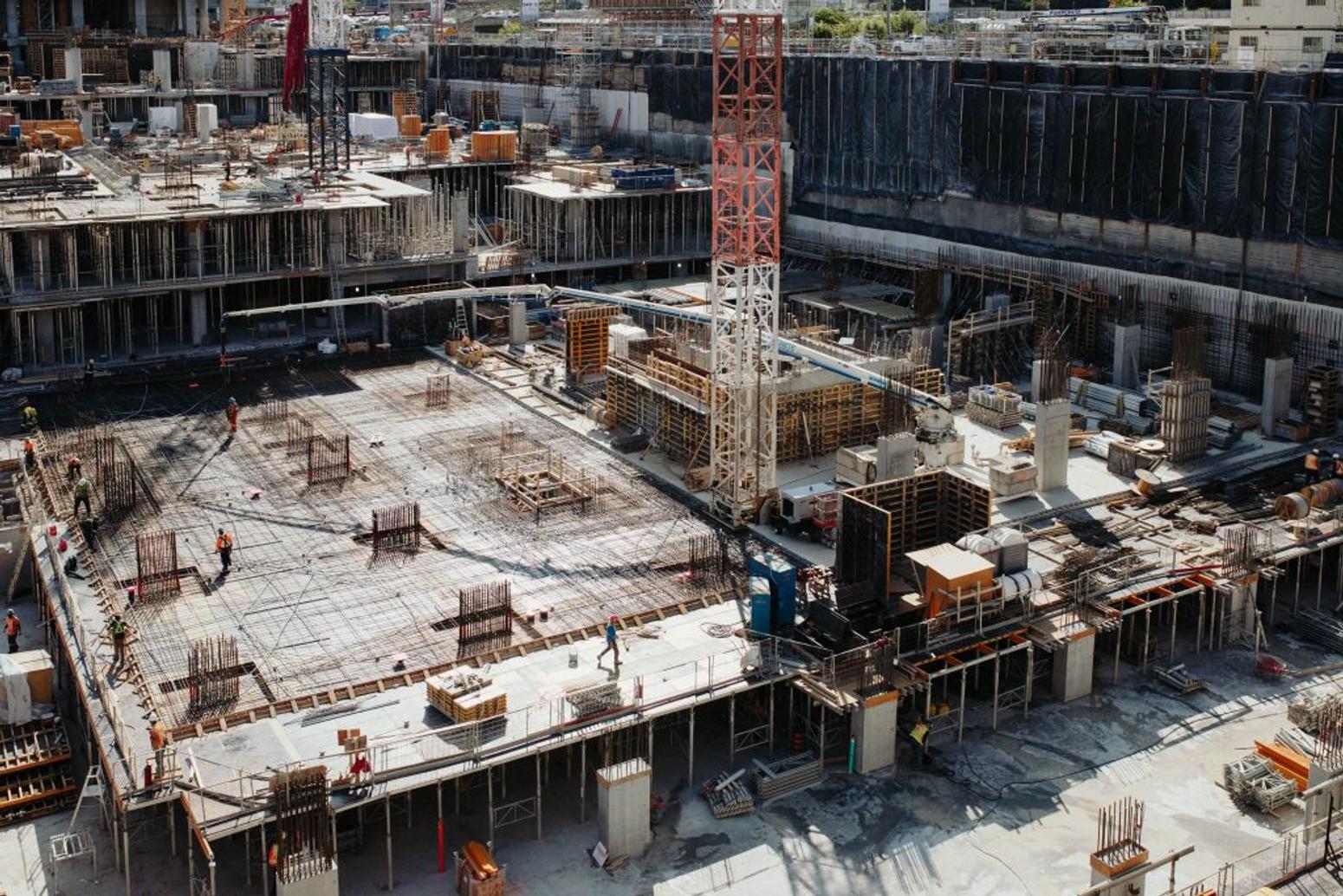 EllisDon is also constructing the podium portion of Building F, which is a total of 400,000 square feet on six levels below grade and 6 levels above grade. Upon completion of the podium, EllisDon will turn over a transfer slab to Delterra who will build a 46 storey residential rental building, featuring 613 units, while EllisDon completes the commercial office space below. The coordination and logistic planning between the co-construction managers started in 2017 and continues as work progresses onsite.EllisDon, in conjunction with the owners and design team, fast-tracked the procurement process by onboarding the concrete, formwork, rebar, curtain wall, elevator, mechanical and electrical trades as the design was still being
developed, according to Murkar.“This method of procurement allowed us to secure the key trades ahead of the current surge in the Toronto construction market,” he adds “It also allowed us to expedite the start of construction as we worked through the finalization of the design with the consultants and coordinated the sequential release of IFC documents to complement our construction schedule,”Buildings F and G have been under construction for 16 months and are slated to be complete in 2021. 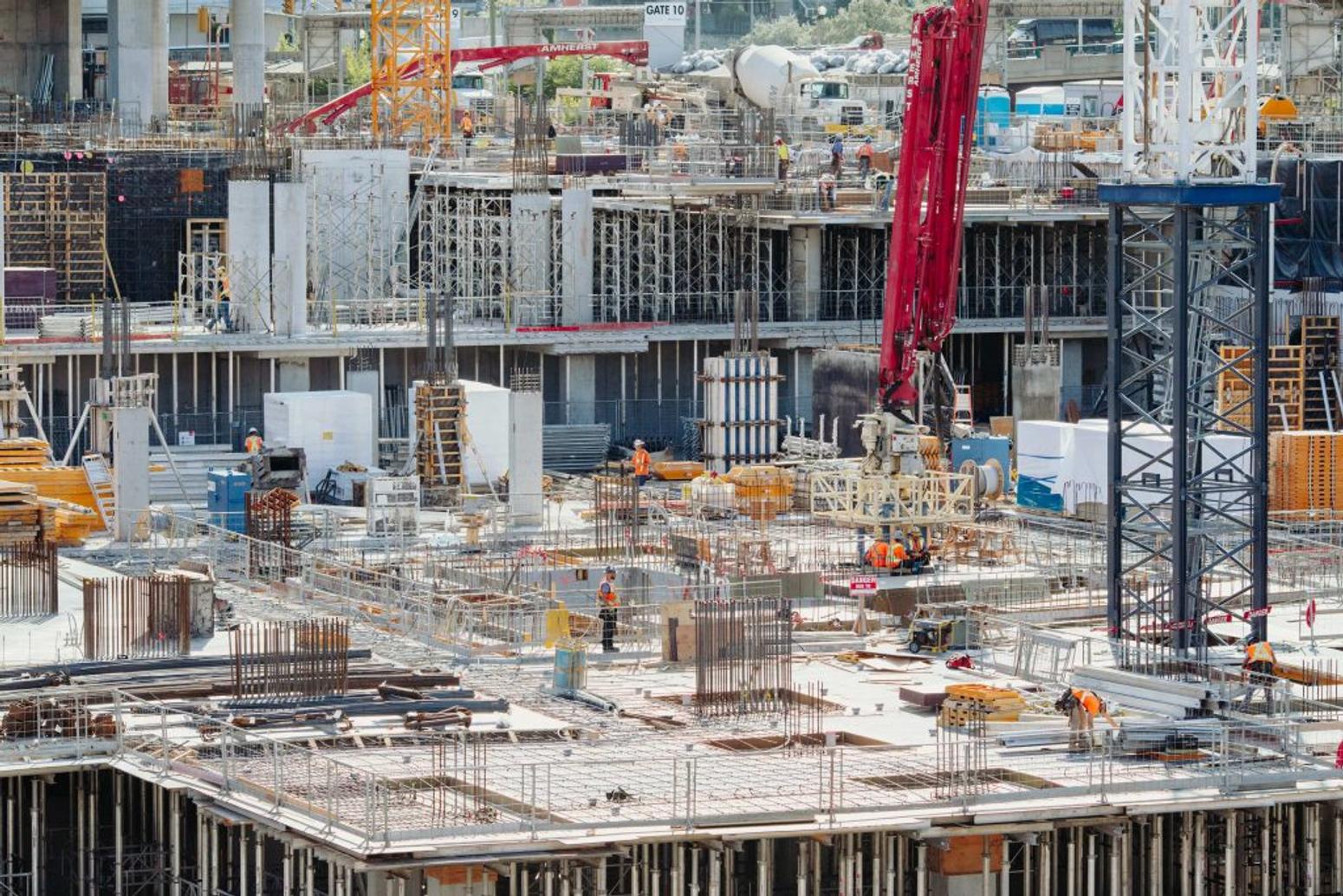 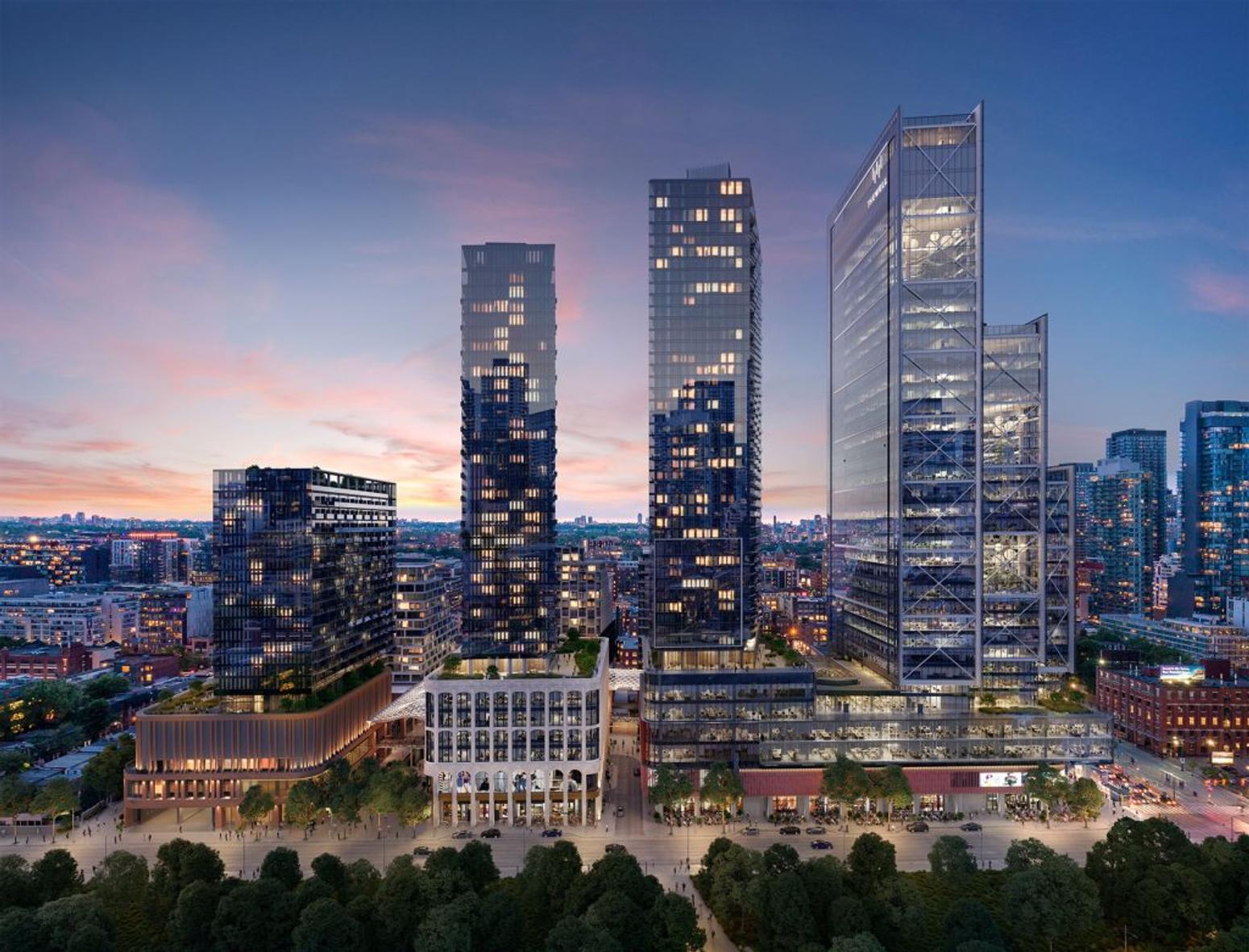