Written by Peter Caulfield for the Journal of Commerce

EllisDon Corporation has won a silver award in the General Contractor $15 million to $45 million category for its work on the Grandview Heights Aquatic Centre (GHAC) in Surrey."It's not a typical suburban swimming pool," said project manager Gary Watt."It has a unique and complex design. For example, there are large buttress columns at either end of the building and an undulating roof form. Every part of the structure was like a custom build."Located at the intersection of 168th Street and 24th Avenue in South Surrey, the 94,180-square-foot facility is owned by the City of Surrey.The aquatic centre has three levels: The basement, where the mechanical systems are located; the main level, where the swimming pools are situated; and a mezzanine, where there is a gymnasium and a viewing area for spectators.The GHAC, which anchors the eastward expansion of the Grandview Heights neighbourhood, is connected to a potential district energy hub, the first of its kind in South Surrey. The centre's 10-lane, 50-metre, Olympic-size competition pool is built to the standards of LEED Silver and the Fédération Internationale de Natation (International Swimming Federation), so that it can host regional, provincial, national and international sporting events.With seating for up to 900 spectators, Surrey hopes the GHAC will be a major destination for diving and swimming, synchronized swimming and water polo competitions.In order to prevent direct light from being reflected through the water and possibly interfering with the competitive swimming events, polycarbonate panels with an R-value three times that of glass were installed along the south side of the facility.In addition to its facilities for competitive swimmers and divers, the aquatic centre is equipped to handle recreational users and their families, without compromising the needs of either group of users.For recreational swimmers, GHAC has a number of features, including a 500-square-metre leisure and lifestyle pool with a lazy river feature; a fountain and an area for the very young; a water slide; a steam room and dry sauna; fitness and weight room facilities; and family and adult hot tubs.One of the most striking features of the aquatic centre is its roof, which is a wooden deck on top of glulam beams that are suspended between concrete buttress structures on either side, as well as in the middle of the building in a curved formation.The undulating roof form was designed to provide clearances for the Olympic dive platform at one end, and the recreational water slide at the other. Five-inch by 10-inch glulam beams hang like cables from post-tensioned concrete buttress at each end of the building.Prefabricated from regionally-sourced Douglas fir beams, EllisDon worked with the structural engineer to lift the beams into place with mobile cranes in just eight days. Slotted steel structure connections that were attached to the glulam roof beams permitted deflection tolerances of 200 mm in the roof design. 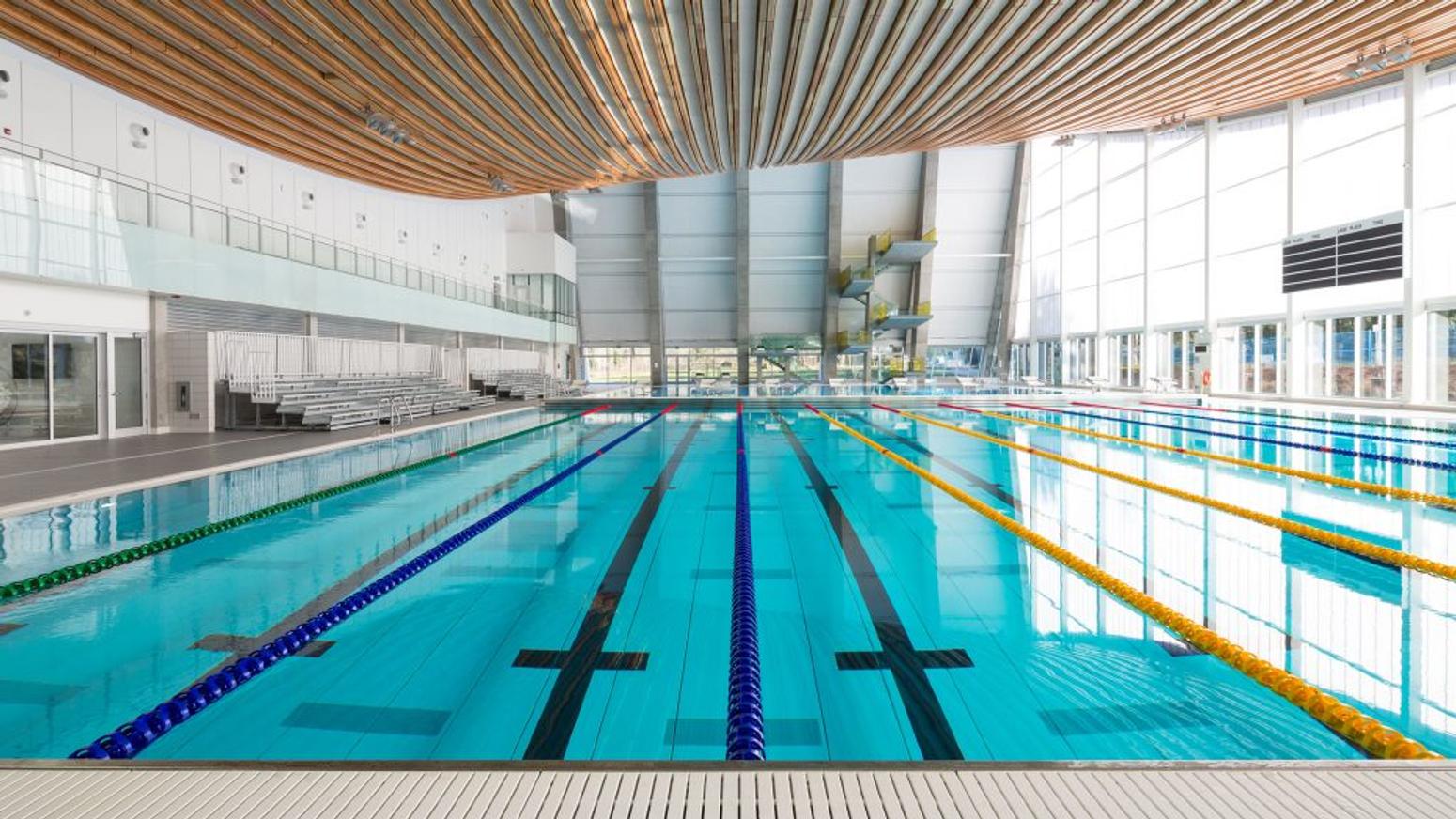 The roof is supported by vertical cast-in-place concrete columns, creating a division between the leisure pools and competitive and diving pool area.EllisDon worked with the concrete form-work subcontractor to create a modular form work design for the columns that could be assembled and modified quickly during the project. In addition, the rebar cages were prefabricated before the modular forming system was installed, which saved time and money.Because swimming pools are more humid than most buildings and require more air conditioning, the air quality at GHAC needed to be carefully regulated.A trichloramine extraction system filters gases from the surface of the pool before they can affect a swimmer's breathing. Thanks to a high level of mechanical efficiency, there is no heat exhausted from the building.Construction of the aquatic centre began in August 2014 and substantial completion was reached in December 2015.