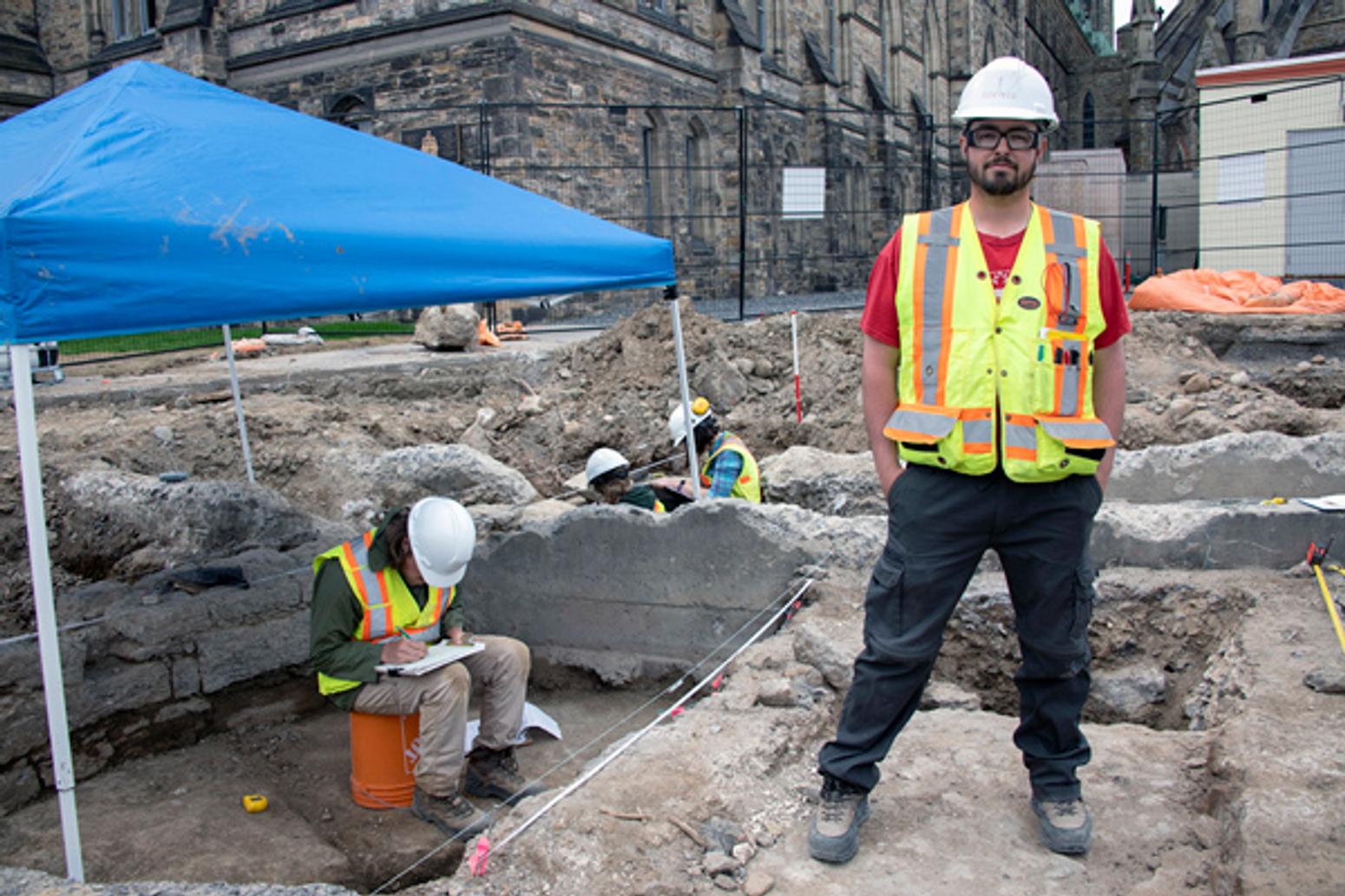 Photo by HER MAJESTY THE QUEEN IN RIGHT OF CANADA

Article by Grant Cameron for Daily Commercial NewsStephen Jarrett, wearing a white hardhat, safety glasses and reflective construction safety vest, is standing inside a fenced-off area next to the massive Centre Block building on Parliament Hill in Ottawa.Nearby, several workers under his guidance, some with small trowels, are busy with the task at hand — methodically digging and scraping at the brown, earthy clay in hopes of uncovering a new find.“What you’re seeing here is the crawl space underneath the building during the time when they were doing the landscape after Parliament was built,” explains Jarrett, archeological project manager at Centrus, which is providing architectural and engineering services for the Centre Block rehabilitation.It’s not his first archeological rodeo, per se. Jarrett has led a number of assessments and is licenced under the Ontario Heritage Act. This time, he’s directing a team that’s excavating the remnants of a military complex on The Hill that predates Confederation and the founding of Ottawa.The digs, which began in April, are focused on the remains of 19th century barracks that were built for Rideau Canal workers and a guard house that, at one point, served as Bytown’s first and only jail.Workers have uncovered the walls for the barracks and guard house. The structures were used between the 1820s and 1850s.The remnants were discovered as part of an assessment done prior to starting renovations of Centre Block.Asha Boucher, senior project manager at Public Services and Procurement Canada (PSPC), said it is standard practice to do archeological studies before construction work that involves excavation.“This was part of the assessment that we were doing and the investigation that we do prior to starting the renovations of Centre Block.”The dig hasn’t slowed renovation plans for Centre Block, she said.“No, it hasn’t slowed anything down. We were anticipating to find some of the archeological foundations.”As a result of work that was done previously, officials figured they’d find barracks and had a good handle on where they were.A faded old map from 1853 of Barrack Hill, which is now Parliament Hill, showed where soldiers’ barracks and a guardhouse used to be.“We knew there was a potential for barracks to be there and so we dug a trench using a backhoe to look for the layers,” Jarrett said in an interview.It’s been a very good find.The complex contains the remnants of what existed on Parliament Hill before Centre Block was built, during the time the Rideau Canal was first being constructed.The barracks, a guard house, jail, stables and cookhouses were all built on the north half of The Hill for soldiers in the Royal Sappers and Miners Regiment, who were tasked with the backbreaking work of digging out more than 200 kilometres of earth from the Ottawa River to Kingston, Ont.The barracks themselves are about 68 feet long and 38 feet wide with a porch around the outside edge. It was used by soldiers and their families.The military complex was demolished in 1858, so the first of the parliament buildings could be built. The site, and the artifacts, are important because the venue was the headquarters for the soldiers involved in the entire canal construction.“It’s in a better state of preservation than we had anticipated,” said Jarrett. “Obviously, there’s been a lot of landscaping through the years up on Parliament Hill along with some other things that were done well in advance of the archaeological dig, so the chances of it being disturbed by any of that activity was high.”A treasure-trove of military items has already been uncovered, including chin straps, tags, buttons, pins, gorgets — which officers often wore around their necks — and other domestic items, like coins.The contractors who built the canal encountered a lot of problems, Jarrett said, so the exact amount of use of the barracks is not exactly known as the soldiers were often deployed out to different locations along the route.

Photo by HER MAJESTY THE QUEEN IN RIGHT OF CANADA 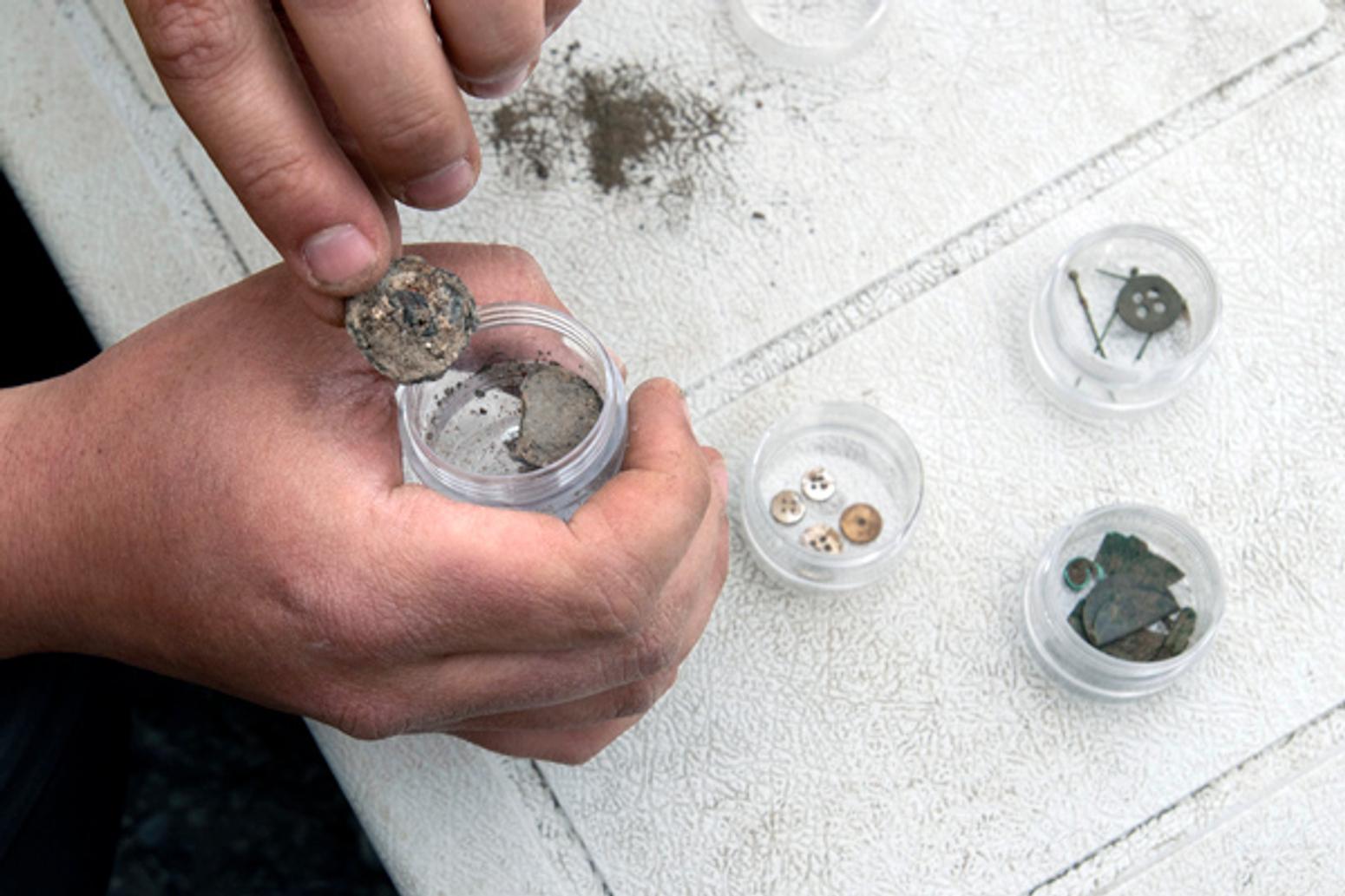 Jarrett said the artifacts will give archaeologists a better handle on how people lived on The Hill and a better understanding of the military occupation through time.While excavation work on the barracks has now been completed, the team is now working on other projects, such as excavating the guard house.Read the full article HERE