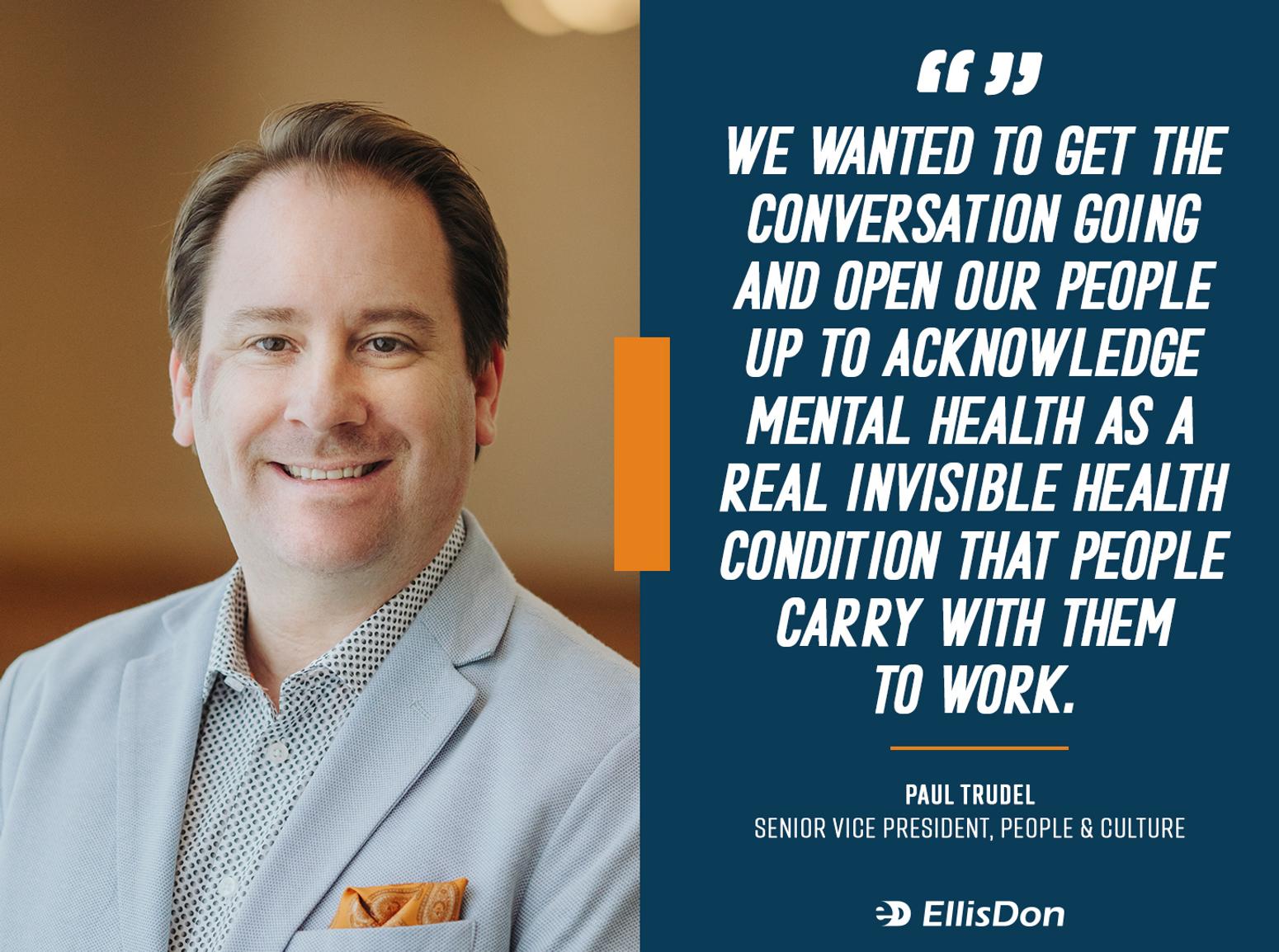 An emphasis on safety isn’t just a matter of taking precautions against physical danger on construction sites for EllisDon. In response to what it was hearing from employees, the contractor unveiled a mental health training program early last year.It consists of an in-house-created mental health in the workplace training component and mental health first aid training provided by St. John Ambulance.A chance encounter between chief executive officer Geoff Smith and an employee suffering from some mental health issues was the impetus for the program.“But we were also hearing more and more stories from employees who were struggling with work-life challenges,” says the company’s senior vice-president of people and culture, Paul Trudel, whose department created the in-house segment.Designed to support the importance of mental health in the workplace, that portion consists of an approximately 20-minute-long, five-part video. Those five videos are split up into five lectures which also include supplementary articles and resources which can be accessed online. (One of those resources is an employee assistance program, which is a confidential, short-term, counselling service).Unlike other company training videos, there are no paid actors. Instead, employees watch the emotional story of one of their colleagues — a woman who was coping with a family tragedy and who is also a member of Trudel’s own department.When planning for the video was underway, that individual “put her hands up and asked to be profiled.”“I wasn’t sure how people would react,” says Trudel, who says he advised her to talk the matter over with her husband.In the end, the employee persisted and in the video shares her story, her eventual return to work, what life is like now, and the mental health impact on a daily basis.“In the conclusion, the employee wraps up her story and shares her reason for sharing it.”Released in January of 2019 in a program campaign launch, the video is mandatory watching for new employees when they complete their compliance training.That release was the culmination of approximately four to five months of work, of which the longest and most labour-intensive phase was conducting the necessary research into mental health issues and available help, says Trudel.“The actual videography took about two days and that was followed up by about three to four weeks in the editing process and adding graphics and text.“We wanted to get the conversation going and open our people up to acknowledge mental health as a real invisible health condition that people carry with them to work.”The video and the online component are not intended to replace the assistance employees can obtain from trained professionals, Trudel says. “That’s not our expertise. We are not mental health professionals.”And that’s why the company is partnering with St. John Ambulance in the delivery of the agency’s mental health first aid training. As the planning and preparation for the video was underway, a cross section of EllisDon managers and supervisors participated in a pilot test of that training.Officially rolled out last March, that segment consists of two days of “evidence-based training” — training supported by research — conducted by St. John Ambulance facilitators whose credentials include their own training, experience delivering training to adults and working with employers and other community partners.The course content includes recognizing and understanding the symptoms of mental health problems, including those related to substance abuse, promoting the recovery of good mental health by accommodating or supporting employees in distress or recovering from a crisis, and increasing productivity and reducing absenteeism, Trudel says.More than 300 employees across the country have taken the mental health training and the goal is to achieve a 100-per-cent participation rate, he says.Noting that there is an element of risk in construction, Trudel acknowledges there is a degree of “selfishness” at the foundation of the program. “We need people to remain focused and we want our workplaces to be safe.”To ensure the content remains relevant and not allowed to stagnate, the plan is to produce and release subsequent videos. Planning for this year’s video is underway, Trudel says.“We are looking to create videos as employees come forward with their stories and an annual story through a video is what we want to do. Our goal, at the end of the day, is to help create conversations around mental health at EllisDon and foster an environment where employees feel safe and supported to share their stories.”For the full article click HERE