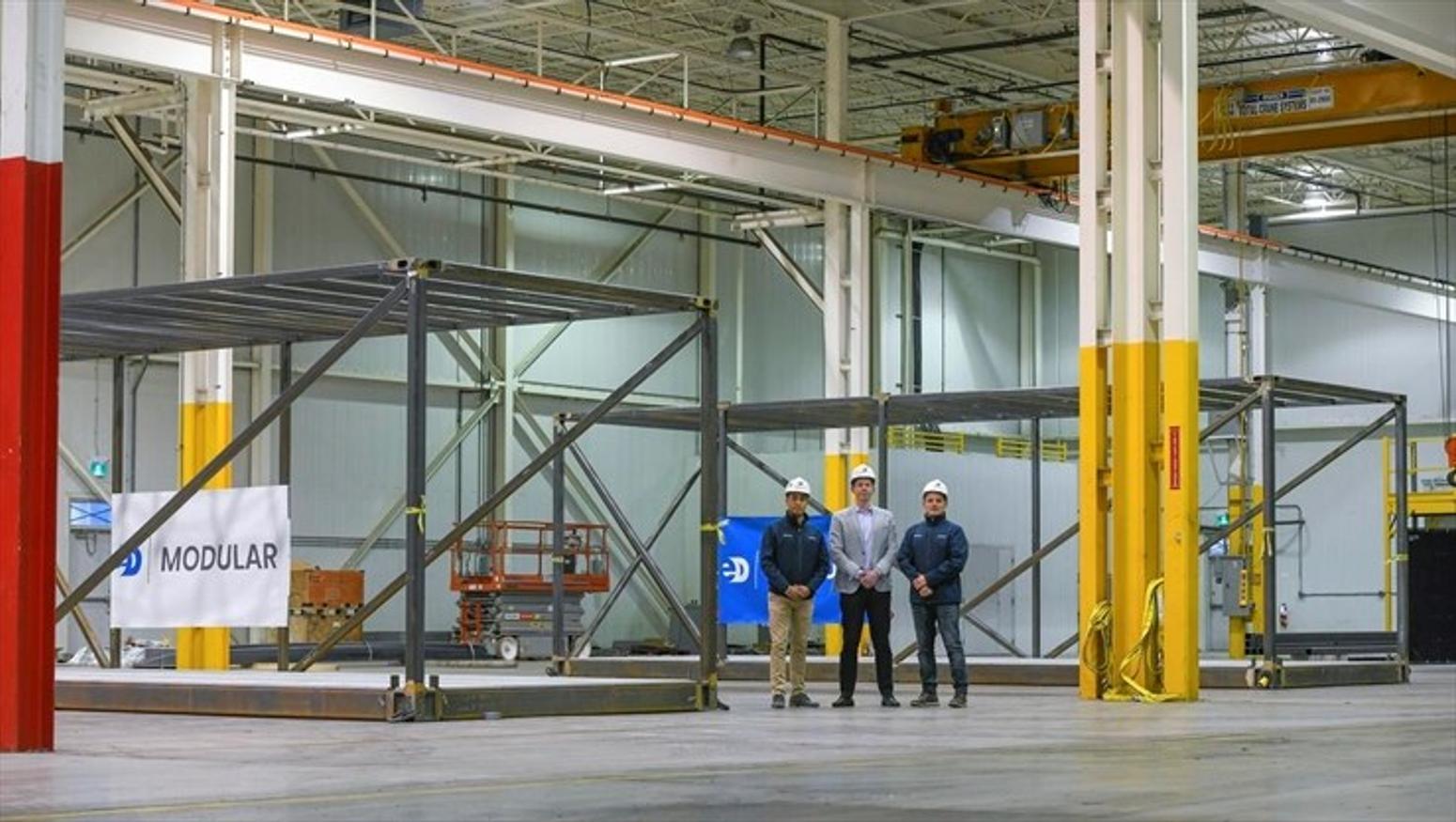 Article and photos by Tom Hogue for The Hamilton Spectator.

Standing in front of two modules at ED Modular are, from left, project co-ordinator Temo Cruz, vice-president Xavier Toby and project manager Craig Gatto. - Gary Yokoyama, The Hamilton SpectatorConstruction giant EllisDon is building a state-of-the-art plant in Stoney Creek to make steel-ribbed offices and other building blocks that can be stacked like Lego on a construction site.Up to a million square feet of prefabricated and fully furnished units such as student residence rooms and office floors will be assembled annually at the Hamilton plant when production ramps up late next year at EllisDon's new subsidiary ED Modular.Completed building units that come off the assembly line — including sections of a warehouse or dozens of bathrooms with installed fixtures and plumbing — can be trucked to a construction site, lifted into place by crane and fastened down in an afternoon.
About 200 jobs will be created at the 300,000-square-foot plant on South Service Road between Fruitland and Fifty roads."We like the idea of being in Hamilton because there are a lot of skilled trades people who are eager to do something new," said Xavier Toby, director of prefabrication and technical sales for ED Modular.Robitics and custom welding equipment is being installed now from partner Z Modular, owned by Zekelman Industries, a global leader in steel pipes. At Zekelman's Harrow, Ont., plant near Windsor, sheet metal is turned into hollow tubes for international clients that will shortly include EllisDon's Hamilton factory."Steel made in Hamilton will go down the road to Harrow and then comes back full circle to our plant in Hamilton ," Toby said.Though EllisDon has experience with modular construction methods, the work had been through subcontractors. ED Modular, established last March, is the company's first owned and operated division devoted to the emerging construction technique.To this point, modular has been considered "a boutique solution" useful in remote sites such as the Arctic, where skilled trades are in in low supply or in situations with tight timelimes, but Toby said his goal is to "bring the method to the mainstream.""Modular buildings currently represent less than two per cent of all construction," he said."With this new facility, we are hoping to significantly shift that percentage as we build momentum and set the use of prefabrication and modular technology as a new standard in the construction industry.""Our major competititor is conventional construction without a doubt," Toby said "Other modular builders are not competitors — I see them as our friends because we're all part of the same industry trying to work together to do something different."Some of those friends include Z Modular, which uses a VectorBloc construction system designed by Toronto inventor Julian Bowron.As the modular sector expands, ED Modular plans to double production to two million square feet of output by adding a second shift and 200 jobs at the Hamilton plant, Toby said, adding that "if that goes really well, we'll be looking at adding another facility.""We're going to ramp up by taking on some smaller projects through the next year and work toward larger projects."And among projects that might benefit from modular design are buildings such as hotels that can be built quickly from a common cookie-cutter design.Affordable housing projects might also benefit from the efficiency of modular, he said."We're very interested in doing our small part to address the extreme shortage of affordability housing," Toby said of a modular building method that can "turn out high-quality products at an increased rate in a cost-controlled environment."
thogue@thespec.com