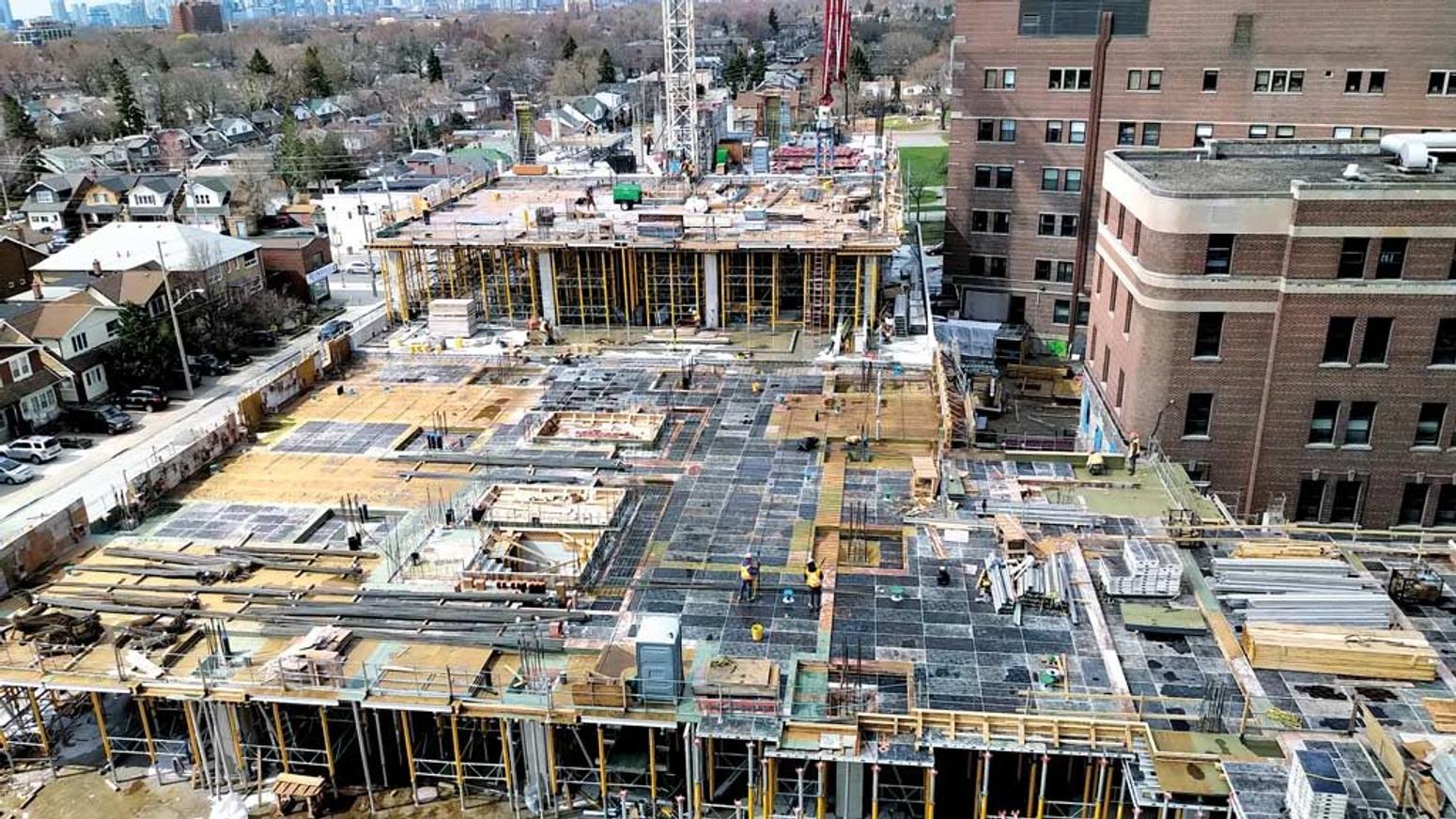 Article by Grant Cameron for the Daily Commercial News

COURTESY OF ELLISDON — Despite the COVID-19 pandemic, work at the Michael Garron Hospital project in Toronto is moving ahead well, states general contractor EllisDon. A hospital wing and podium have been demolished and hundreds of caissons have been installed since work started in 2018. 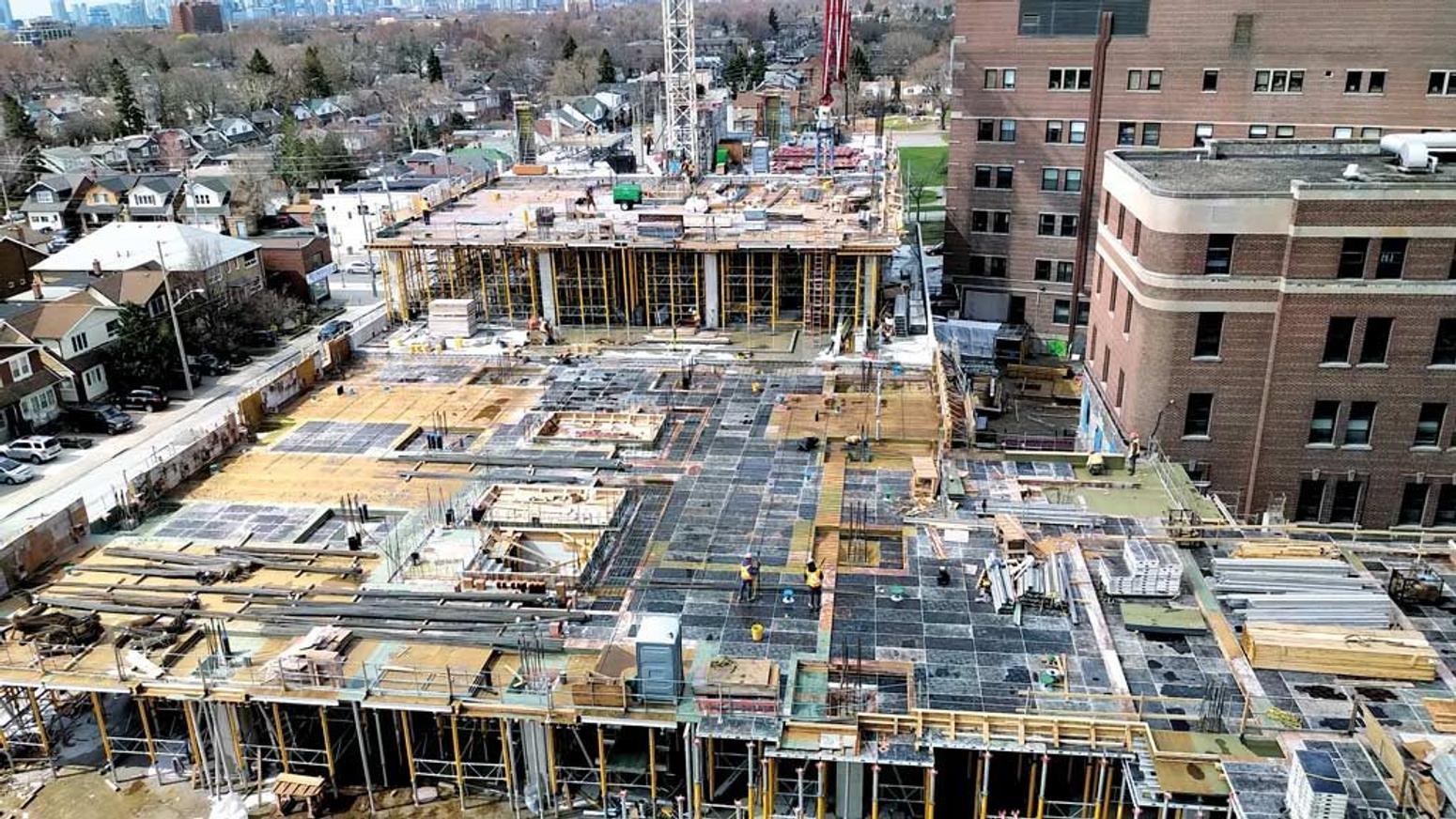 It’s 3 p.m. on a typical workday at the $500-million redevelopment project at Michael Garron Hospital in Toronto. Trades are on the tools but keeping a respectful distance from one another due to COVID-19.A tower crane hook is moved into position and a worker secures it to a load. Ever so slowly, the cargo is lifted, carefully swung across the site and lowered. Like clockwork, the hook is swung back for another load.A dozen or so workers are putting rebar into place. Nearby, concrete is being pumped into a form and smoothed. There are large columns of concrete everywhere, future supports for a new patient care centre.The site at Coxwell and Sammon avenues has been a beehive of activity since shovels went into the ground in 2018 for the eight-storey centre. A hospital wing and podium have since been demolished and hundreds of caissons have been installed to create a watertight structure around the mammoth building.The wall was the first step in preparing the site for excavation work and build of a four-level, below-ground parking garage. Drill rigs were brought in to excavate holes into clay 24 metres below the surface.The job was a challenge as the lowest portion of the parking garage was eight metres below the water table. To ensure there were no leaks, the wall had to be ground flat and a waterproofing membrane applied.“In total, 533 caissons were drilled to complete the shoring wall,” says Gabriele Mabrucco, superintendent at general contractor EllisDon. “The total volume of dirt removed from the site was approximately 65,000 cubic metres, which includes dirt removed for the building footings located underneath the fourth level of parking (P4). As the structure was built from P4 back up to the ground level, waterproofing was installed around the entire perimeter of the structure to protect from groundwater.”In total, 533 caissons were drilled to complete the shoring wall at the Michael Garron Hospital project in Toronto. The total volume of dirt removed from the site was approximately 65,000 cubic metres.

COURTESY OF ELLISDON — In total, 533 caissons were drilled to complete the shoring wall at the Michael Garron Hospital project in Toronto. The total volume of dirt removed from the site was approximately 65,000 cubic metres. 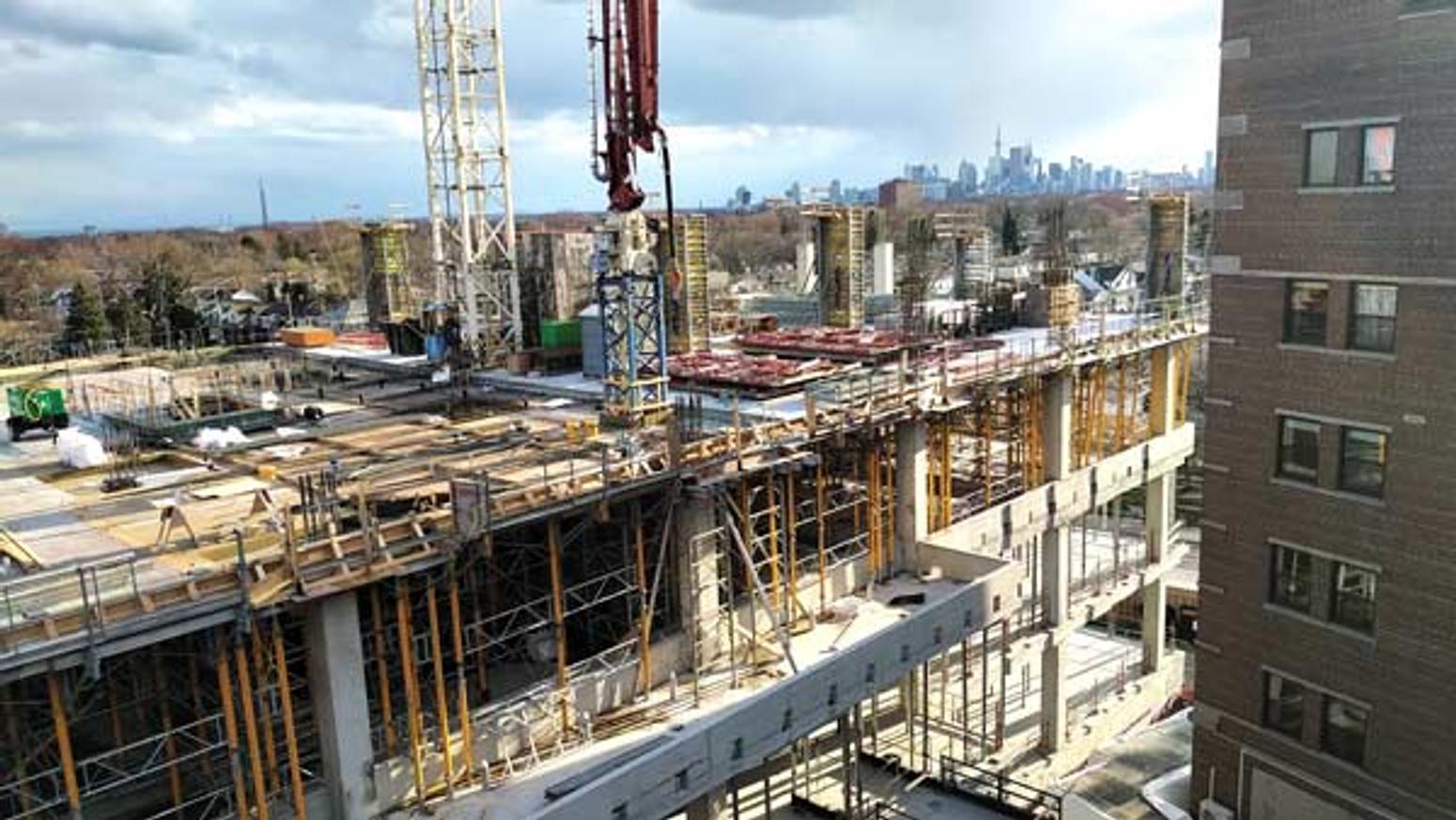 Today, formwork is well underway on the building. Interior partition framing is being erected and work has started on the exterior envelope. Concrete pouring activities for the second-storey floor slabs of the building have been completed. All concrete for the centre and an adjoining three-storey pavilion should be poured by summer.The job has been complicated by the fact the work is taking place on a small footprint and the hospital is still functioning, which has required the builders to take special measures.“The hospital’s construction site is located in very close proximity to its existing campus,” says Mabrucco. “Prior to the start of construction, noise and vibration sensors were installed in high-sensitivity areas across the campus in order for the construction team to continuously monitor levels in real-time and ensure that the hospital is able to maintain 24/7 operations throughout construction.”Over the next several months, the superstructure of the centre will be built up. Exterior studs and curtainwall will be the first elements to be installed, followed by the brick and aluminum cladding. When the build reaches the fifth-floor level, two hoists will be installed to lift and distribute materials to workers higher up.The first two floors of the centre will be partially clad with the brick and the masonry will compliment the exterior of the other buildings on campus. Above that level, the aluminum panelling will be used to give the hospital and modern, sophisticated look.Construction of the patient care centre is expected to be finished in 2022.The new centre will have all the bells and whistles. The first two storeys will be comprised of outpatient clinics, an ultrasound suite and food court and the upper floors will service in-patient medicine, surgery and mental health beds.The third floor of the structure will be almost exclusively for large mechanical equipment required to supply the hospital.The project is incorporating connections to the natural environment and will include large green spaces, a green roof and two outdoor terraces for staff, public and patient use. In addition, the hospital hopes the new build will achieve LEED Silver. About 25 per cent of the materials used on the project will have a high rate of recycled content.The design of the centre has been optimized to make use of natural light and it will have advanced ventilation recovery systems and high-efficiency boilers and chillers. Metering systems have also been incorporated into the design, which will collect data from the mechanical and electrical systems and provide ongoing energy analytics.Design of the patient room windows and building exterior were also carefully considered to maximize exposure to daylight. Motion sensors will be installed in staff and patient lounges, offices and washrooms to reduce energy consumption, and LED lighting will be incorporated throughout the building.Mabrucco says once the patient centre is complete, other outdated wings and a podium at the hospital will be demolished to make way for a large landscaped area off of Coxwell Avenue. The area will include a U-shaped driveway and entrance canopy and will become the new main entrance and drop-off area.Adjacent to the landscaped area will be the hospital’s original D-wing, which was first built in 1929. The exterior of the building will be refurbished and the interior will be renovated to modernize the structure.For the full article, click HERE.