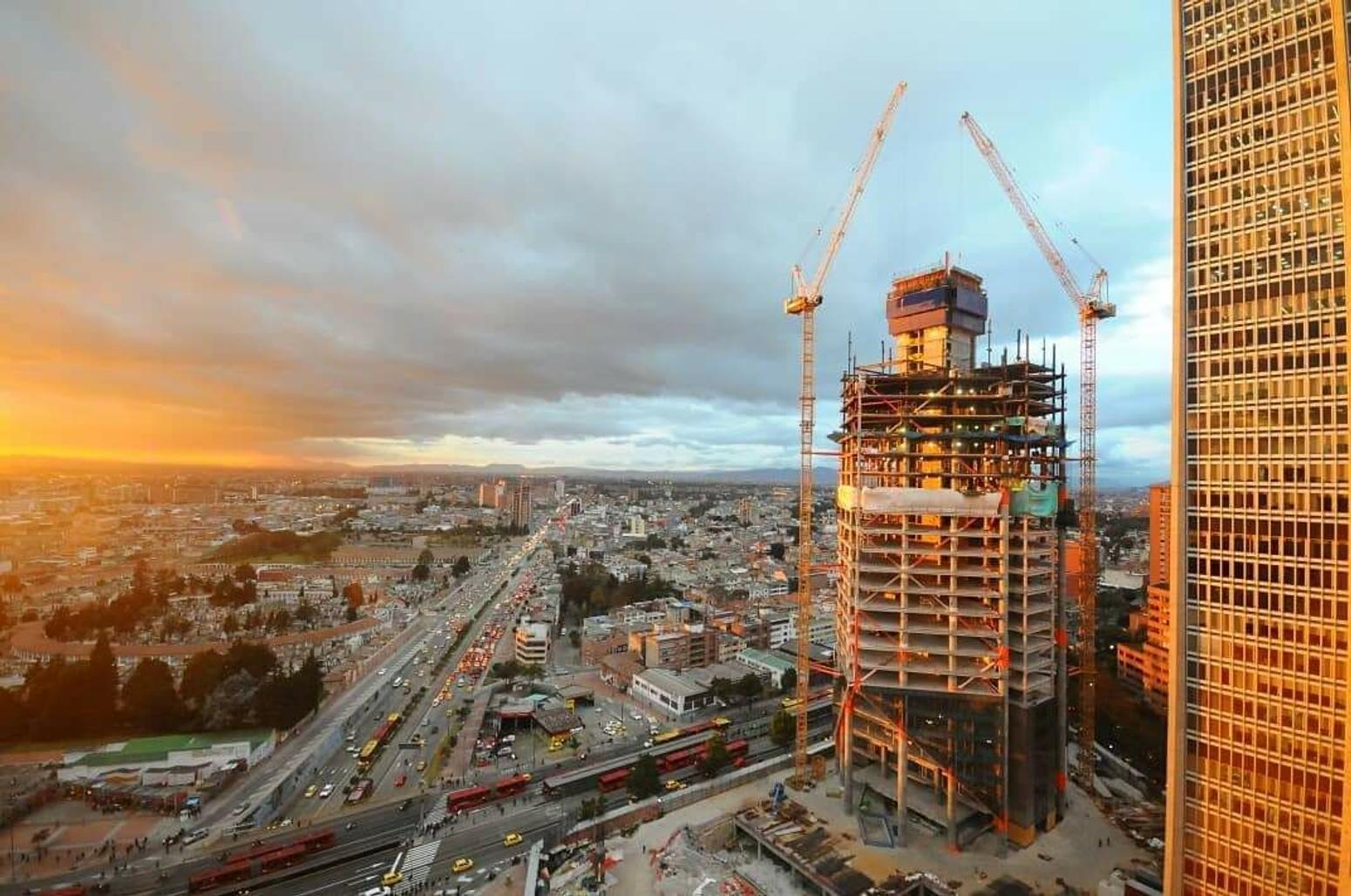 Colombia's capital city of Bogotá is a vibrant cultural destination containing everything from internationally recognized universities to regional offices for global companies to historic sites, churches and museums. It is one of several Latin American communities experiencing an uptick in construction projects across multiple sectors, thanks in part to increasing globalization that is attracting international participation in the local building market.Several projects are underway to revitalize the former business district, including ATRIO, a major mixed-use commercial development featuring two iconic skyscrapers: a 46-story North Tower and a 62-story South Tower.Uniting Experts Worldwide

Construction of the estimated $500-million mega project is being spearheaded by a joint-venture team consisting of Colombian-based ARPRO and EllisDon, an international construction and building services company. Two London-based firms are also participating: Rogers Stirk Harbour + Partners (RSHP) as lead architect and Arup as chief design engineer.The project is being delivered in two phases, starting with the $284-million North Tower, which includes approximately 540,000 sq ft of flexible office space, 50,000 sq ft of public services, 20,000 sq ft of retail and five underground levels of parking. A large, open public space at street level will help to promote an enjoyable, functional urban lifestyle in an area where up to 72,000 people pass through daily.Rejuvenating a Declining City Center

The ATRIO is situated strategically in downtown Bogotá, between a major north-south corridor and the main highway ferrying travelers to El Dorado.International Airport. While the soaring superstructures will be an impressive addition to the city's skyline, efforts to rejuvenate the area known as Centro Internacional are also intended to attract new investments that will buoy business, tourism, public transport and cultural opportunities."This area has been declining for decades due to decreased investments in good-quality structures," notes Jason García, a senior associate at RSHP. "The project team is keen on making sure the sophisticated ATRIO complex is built exactly as we've designed it, which requires effective knowledge sharing and meticulous follow ups with the Colombian-based construction teams, as well as streamlined coordination among various disciplines to ensure everyone is following the same strategy." 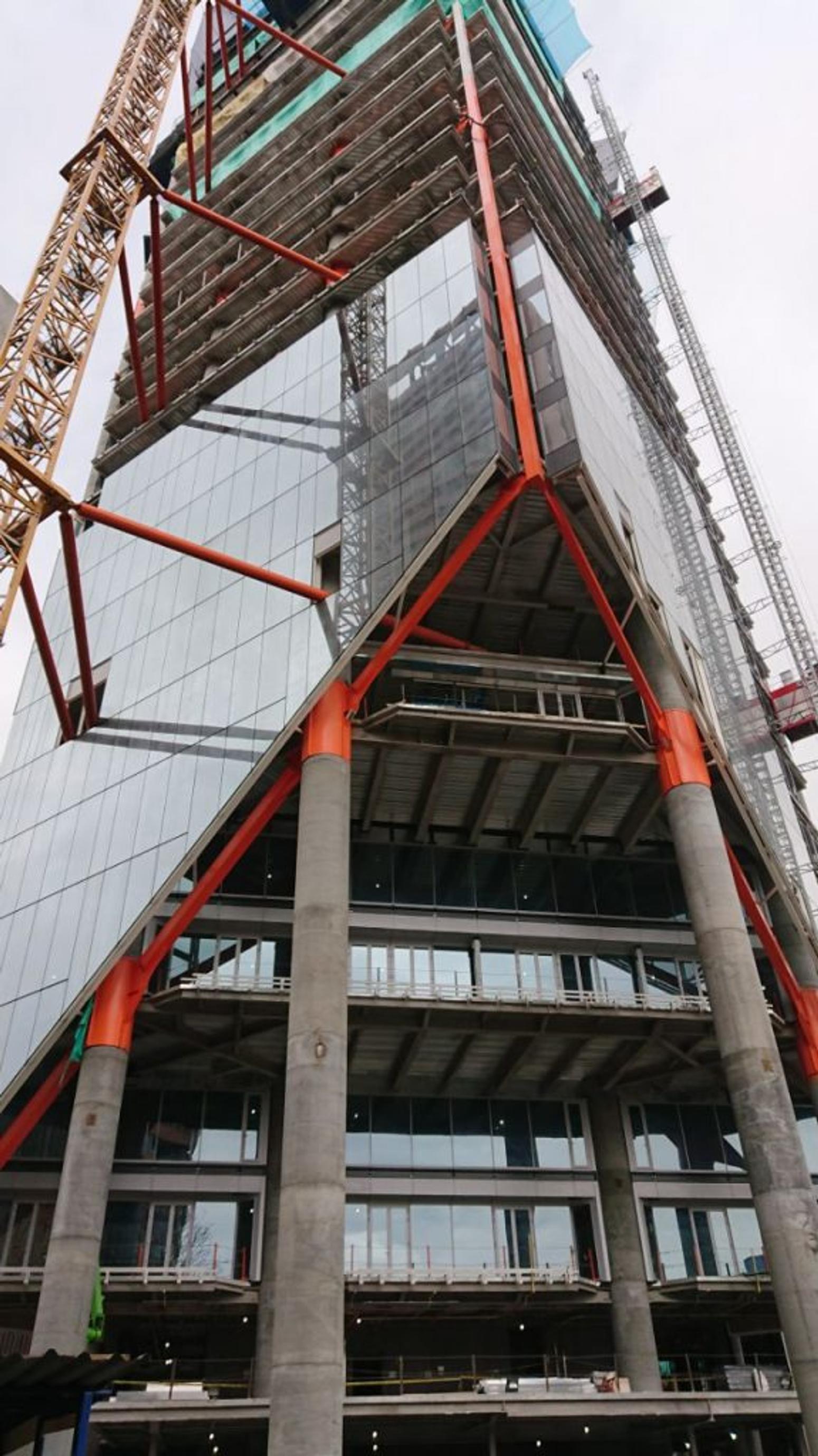 In renderings, the skyscrapers' breathtaking exteriors feature a combination of glass and stainless steel panels, interspersed with large trapezoid panes of curtainwall glass. This elegant facade is complemented by a strong interior designed to withstand cataclysmic events caused by geological or hydrometeorological conditions.Because the office towers are sited within a high-risk seismic zone, designers recommended a hybrid concrete/steel structure. A slender concrete core combined with a steel-braced exoskeleton improves bending and sheer stiffness capabilities, particularly at lower levels where the mega frame cuts back. This arrangement also maximizes space efficiency. 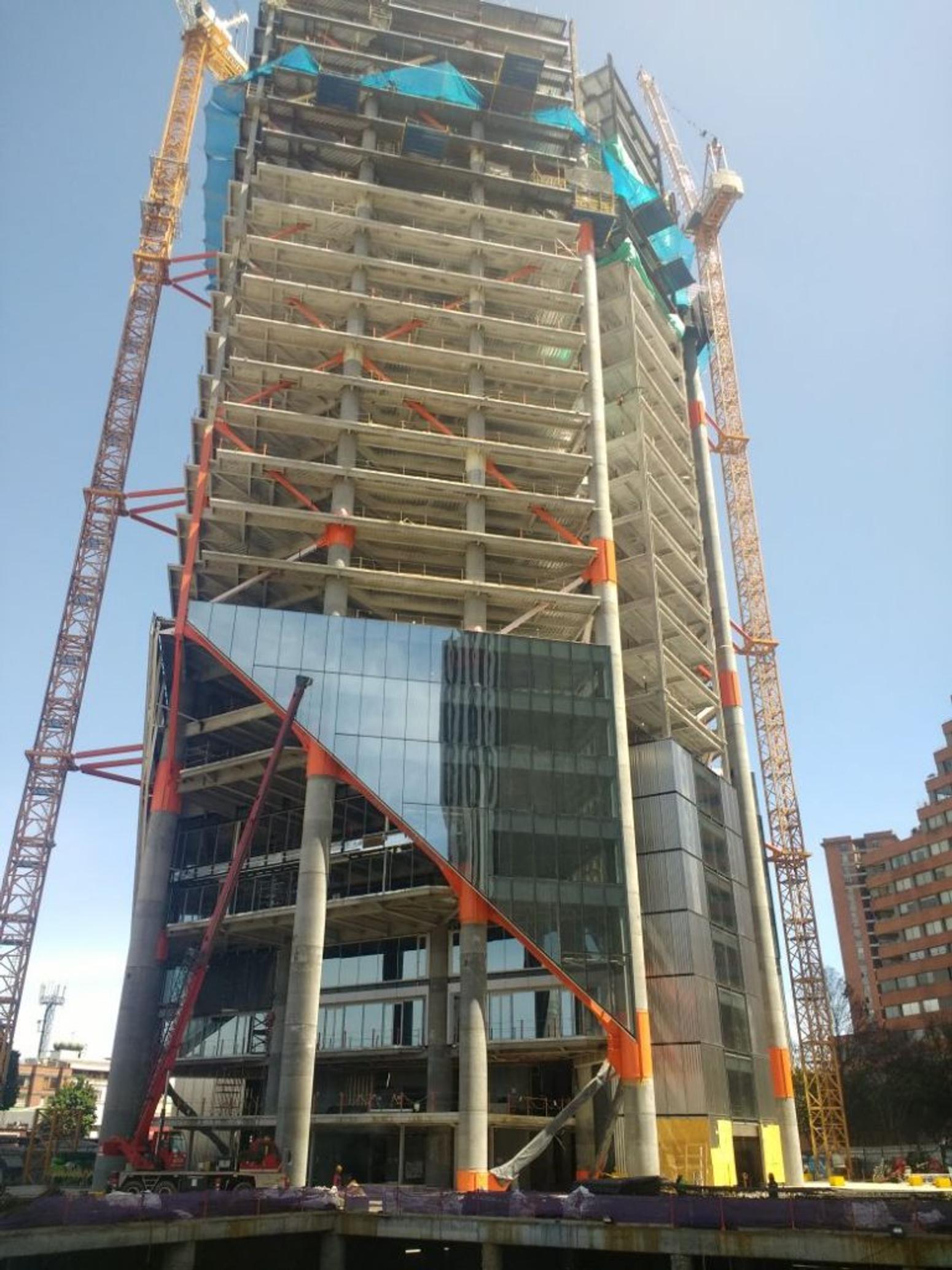 For the North Tower, a top-down construction method was used to reach the raft foundation, at which point workers excavated a ring-shaped perimeter supported by temporary slurry walls. Interior caissons were bored about 230 ft below grade and cast in concrete to support the apron diaphragm ring at each of the five basement levels. Approximately 86,550 cu ft of structural concrete was poured in radial sections until all perimeter walls were cast. This massive concrete pour took place nonstop over a 38hour period and involved numerous engineering and logistical challenges."Careful coordination was essential from prequalifying concrete mixes, to implementing the thermal control plan to guarantee concrete quality, to orchestrating the transport of materials from the supplier's facility to the project site, and more," says Lloyd Keller, construction sciences director at EllisDon.The project also calls for steel-reinforced concrete columns up to 6 ft dia with embedded H sections to transfer gravity forces to the foundations. To reinforce lateral stability, steel bracing painted bright orange tie columns together every second floor.Construction of the North Tower commenced in December 2014 and is anticipated to be completed next May. The North Tower's public space element is on track to wrap up by January 2020. The South Tower is currently in design phases, construction will likely start in 2019 and last approximately three to four years."Working on the iconic ATRIO project has been privilege for EllisDon, allowing us to contribute to transformation of Bogota’s urban landscape," said Jody Becker, SVP Emerging Markets and Chief Strategy Office, EllisDon. "The delivery of this landmark project has enabled us to share our expertise and value-added services within a new international market and to benefit from the knowledge and insights of the local construction community. We are very proud to collaborate with Arpro, our joint-venture partner, and to contribute to infrastructure development in Colombia." Read the full article HERE