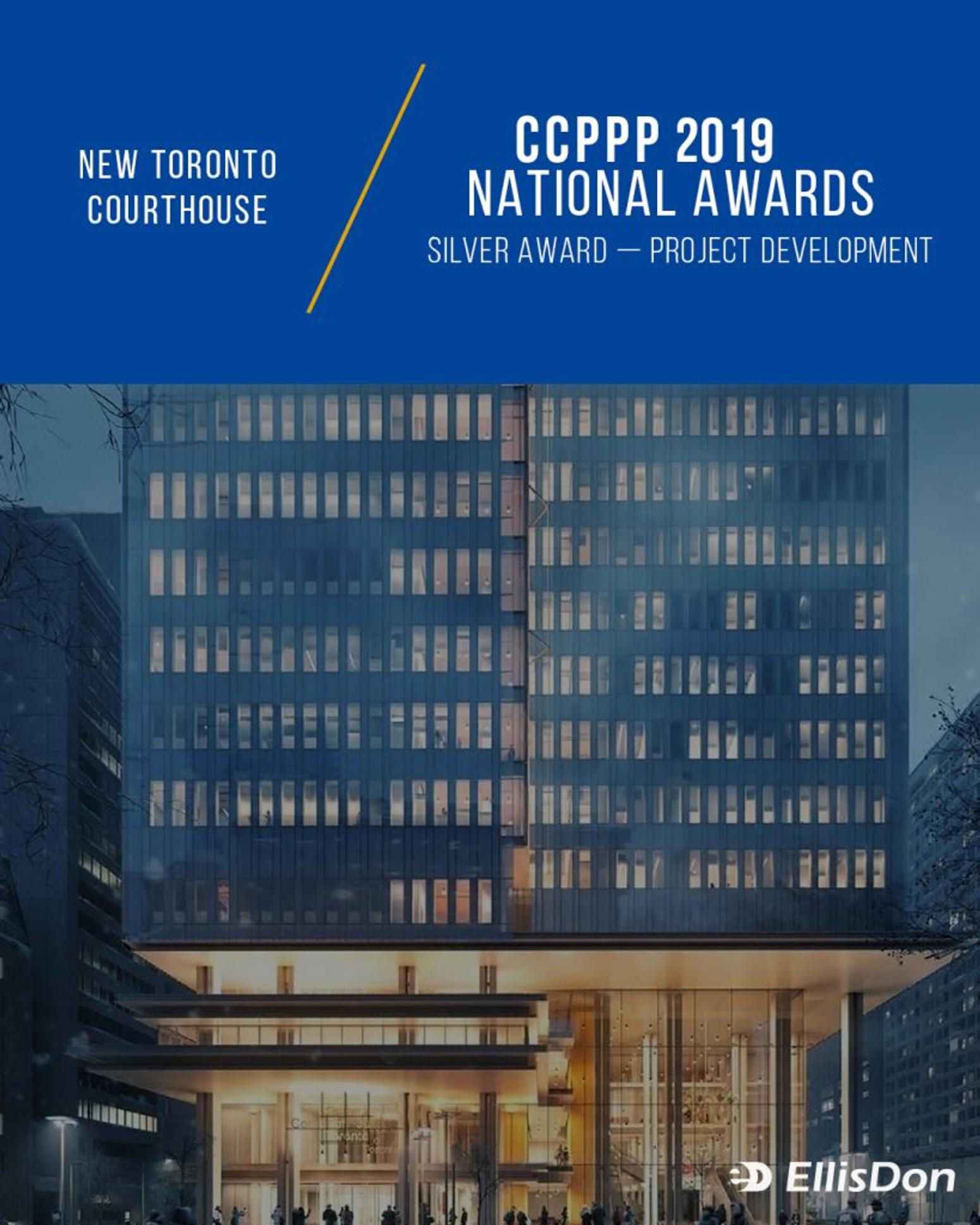 Mississauga, ON, November 4, 2019— Today, The Canadian Council for Public-Private Partnerships (CCPPP) announced the New Toronto Courthouse as the recipient of the Silver Project Development Award for the 2019 National Awards for Innovation and Excellence in P3s.The New Toronto Courthouse is among five award recipients this year. The winning projects all showcase the diversity of projects using P3s to deliver innovative infrastructure that best serves the economic and social needs of Canadians."To be recognized with the CCPPP Development Award for the New Toronto Courthouse is an honour and a testament to the successful collaboration between the partners, setting a new standard for future P3 courthouses in Canada,” says Danny Giacomel, Vice-President, EllisDon Capital. “This partnership brought a unique design perspective to the P3 model and is delivering a landmark in the City of Toronto showcasing its important history and heritage."The partners involved in the New Toronto Courthouse are the Ontario Ministry of the Attorney General, Infrastructure Ontario and EllisDon Infrastructure (with Renzo Piano Building Workshop and NORR Architects & Engineers Limited).The New Toronto Courthouse, currently under construction, will amalgamate six Ontario Court of Justice criminal courthouse locations in one new, accessible location. This P3 project is "noteworthy for its design considerations, as well as its significant stakeholder consultations" to improve access to justice and enhance operational efficiencies as well as commemorating the rich cultural and heritage value of the site,” said the awards committee.Ontario’s first high-rise courthouse, which is set to transform access to the justice system in downtown Toronto, will be honoured with the prestigious award at the CCPPP's 27th annual conference on November 18th at the Sheraton Centre Toronto Hotel. CCPPP’s annual conference is the world’s premier event on public-private partnerships, attracting 1,200 senior public and private sector infrastructure leaders from across Canada and abroad.The Council is a proponent of evidence-based public policy in support of P3s, facilitates the adoption of international best practices, and educates stakeholders and the community on the economic and social benefits of public-private partnerships.The New Toronto Courthouse is slated for completion in 2020.